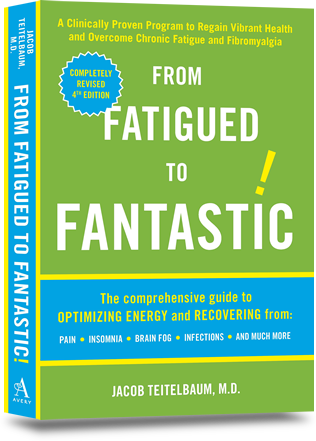 (As an Amazon Associate I earn from qualifying purchases when you buy From Fatigued to Fantastic on Amazon.)

CFS can begin gradually or suddenly. When it occurs gradually, it is most often triggered by hormonal problems (for example, low thyroid), autoimmune illnesses (such as lupus), or candida overgrowth. It can also begin suddenly, feeling like a drop-dead flu that you can't fully recover from. Other common symptoms may include:

There are literally dozens of other symptoms as well.

CFS's cousin, fibromyalgia syndrome, is characterized by severe pain—sometimes all over the body and sometimes only in specific areas. These painful areas can be transient or persistent. FMS pain is initially caused by a shortening or tightening of the muscles caused by decreased energy in the body. It is similar to the way your muscles get tight after a heavy workout. Restoring energy production is the key to helping the muscles relax and the pain to go away.

The chronic muscle pain also triggers nerve pain and central sensitization, which results in a feeling of "brain pain." There are actually seven distinct types of pain in fibromyalgia, all of which can be effectively treated.

Although there are dozens of health tests that can be performed that will reveal abnormalities that indicate fibromyalgia, I don't find any of them necessary for making the diagnosis. The combination of inability to sleep despite being exhausted, feeling brain fogged, and experiencing widespread pain is generally enough to indicate fibromyalgia. The health organizations CDC and ACR have established a checklist of criteria that can assess the possibility that you have either of these illnesses. If you'd like to see what this checklist predicts for you, take the CFS/FMS Checklist quiz here at our site.

Although medical testing is not needed to make the diagnosis, very thorough testing is needed to determine the underlying causes of the illness in order to design an effective treatment protocol.

What Causes These Illnesses?

CFS/FMS acts as a "circuit breaker," with the hypothalamus decreasing its function to protect the individual in the face of what is perceived to be an overwhelming stress (just like blowing a fuse/circuit breaker in a house). This center controls sleep, hormones, temperature, and blood flow/blood pressure/sweating/gut function. When you don't sleep deeply, your immune system also stops working properly. In addition, if your muscles do not have enough energy, they will get stuck in the shortened position, triggering muscle pain (think rigor mortis). When this muscle pain becomes chronic, it can trigger the numerous other types of pain seen in fibromyalgia.

Your "energy crisis" can be caused by any of a number of infections, stresses or injuries.

Some of you had your illness caused by an infection. In this situation, you can often give the time that your illness began almost to the day. This is also the case in those of you who had an injury (sometimes very mild) that was enough to disrupt your sleep or autonomic function, and trigger this process. In others, the illness had a more gradual onset. This may have been associated with hormonal deficiencies (e.g., low thyroid, estrogen, testosterone, cortisone, etc.) despite normal blood tests. In others, it may be associated with chronic stress, antibiotic use with secondary yeast overgrowth, and/or nutritional deficiencies. Indeed, we have found dozens of common causes and factors that contribute to these syndromes.

Understanding this helps us understand the symptom complex seen in CFS/fibromyalgia. Restoring energy production so that your hypothalamic "circuit breaker" turns back on, and eliminating what blew your fuse in the first place, also gives us many ways to effectively treat you!

CFS and Fibromyalgia Are Treatable!

For years, many of us have dreamt of the day when we would see the headline "Effective Treatment for Chronic Fatigue Syndrome and Fibromyalgia Discovered!" We are very excited to report that that day has arrived!

One of our studies published in the Journal of Chronic Fatigue Syndrome is titled "Effective Treatment of Chronic Fatigue Syndrome and Fibromyalgia — the Results of a Randomized, Double-Blind, Placebo-Controlled Study." After decades of hard work by hundreds of researchers in the field, we have progressed to the point where effective treatment is now available for these illnesses! In our study, 91% of patients improved with treatment.

After two years of treatment, patients typically saw an average 90% improvement in quality of life. Pain decreased by an average of over 50%. Many patients no longer even qualified for the diagnosis of CFS or fibromyalgia after treatment! Interestingly, many of the same principles for treating fibromyalgia also apply to muscle pain.

That the vast majority of people improved significantly in the active group, while there was minimal improvement in the placebo group, proves two very important things. The first is that these are very treatable diseases. The second is that anyone who now says that these illnesses are not real and are just "all in your head" are clearly both wrong and unscientific.

The study used the S.H.I.N.E.® Protocol, addressing and optimizing:

A new day is dawning in how CFS/fibromyalgia/MPS will be treated. In support of our work, an editorial published in the April, 2002 journal Practical Pain Management noted:

It's important to recognize that these syndromes can be caused and aggravated by a large number of different triggers. When all these different contributing factors are looked for, and treated effectively, patients improved significantly and often get well. Since this study was published, we have published even more studies on effective treatment. Improving outcomes further!

The medications I find to be most helpful for myofascial pain include:

There are literally dozens of other helpful pain treatments as well. For more information, see "Prescription Relief for Chronic Fibromyalgia Pain."

There are many other helpful natural therapies, medications and other effective ways to help manage discomfort. These are discussed at length in the most recent edition of my book From Fatigued to Fantastic! (Penguin September 2020). These can all keep you comfortable while we go after the pain's underlying causes.

The good news? CFS and fibromyalgia can be effectively treated!

I treat patients worldwide. Consultations can be done in person or by phone. Email Sarah at appointments@EndFatigue.com for more information.

My best-selling books The Fatigue and Fibromyalgia Solution, From Fatigued to Fantastic! (the #1 best-selling book of all time on CFS and fibromyalgia), and Pain Free 1-2-3 can supply you and your physician with all the information that you need to get treated effectively.