Fibromyalgia represents a cellular energy crisis with many causes. Taking steps to increase energy production can often be helpful. One such method is outlined by the "SHINE Protocol" (Sleep, Hormones, Infections, Nutrition, and Exercise) which was shown to be highly effective in an earlier pilot and placebo-controlled study.1,2 A new just-published multicenter study of 257 people with CFS/FMS at 53 health clinics showed that d-ribose supplementation increased energy an average of 61% at three weeks, while also improving sleep, cognitive function, pain, and overall well-being.3

Have you been feeling like a zombie lately? You're not alone! But new research is again showing more reason for hope.

In a new study published yesterday in the Open Pain Journal involving 53 different health clinics, 257 people with CFS and fibromyalgia who felt like zombies were fed 5 grams of ribose 3 times a day for 3 weeks [Editor's note: the zombie part is just my assumption;-)]. At the end of the three weeks, participants' energy levels increased by an astounding average of 61%. In addition, sleep, pain, mental clarity, and overall well-being improved.3

This study confirmed what we had seen in an earlier study.4 Here are the numbers:

At the end of the study, improvement was continuing to increase, suggesting that continued supplementation with ribose would be associated with an even greater improvement. The current double-blind placebo-controlled study, which is being done at eight research centers, is being extended to 12 weeks to see at what point the benefit levels out.

So for those of you feeling like zombies, here's your chance to get a big boost in energy — so you no longer have to feel like you're in a "Night of the Living Dead" movie!

What Causes the Energy Crisis?

Looking at modern life, it seems like the perfect storm for a human energy crisis. Approximately half of the calories we eat are largely devoid of micronutrients (i.e., vitamins and minerals) because of food processing. This has resulted in people being both obese and malnourished for the first time in human history. In addition, the average night's sleep has gone from an average nine hours a night 130 years ago (when light bulbs became popular) down to 6 1/2 hours a night. Adding to this, people are dealing with the increased stress and speed of modern life. To give an example, when I was a child the Madison Avenue advertising mantra was "sex sells." Now it's "fear sells."  Sometimes I miss the good old days!

Another side effect of how we live today that I believe contributes to the many illnesses of modern life is that people's immune systems are simply becoming overwhelmed. Sleep deprivation and zinc deficiencies are two reasons for this. But there are several other important factors contributing to immune dysfunction:

This trio of modern day gut changes not only contributes to a marked increase in food allergies, but can also exhaust the immune system. Why? If you consider that the total body weight of many infections might be measured in under one milligram, and that people may eat upwards of 100,000 mg of protein a day, the concern is raised that even modest decreases in protein digestion, and the absorption of a small percent of partially digested amino acid chains, can dramatically increase the immune system's workload.

To give you an idea of the impact of these food sensitivities, a recently published study funded by our foundation showed that 23 of 30 autistic children were able to return to regular schools after undergoing just one year of food allergy desensitization therapy using NAET (Nambudripad Allergy Elimination Technique). None of the 30 autistic children in a control group were able to do so.5 Interestingly, many researchers in the field are seeing overlaps in the pathophysiology of autism and fibromyalgia.

Ribose — the Backbone of Energy Production

To understand energy production, it helps to look at the "energy molecules" ATP and NADH. These molecules represent the energy "currency" in your body, and the amount you have of them to spend determines how rich in energy you are. A person's body can have an abundant supply of energy-fueling calories, but if those calories can't be converted to ATP and NADH, then they're useless. And ATP is particularly important because the amount of it in your tissues largely determines whether you will be energetic and vital or completely fatigued.

Ribose provides the key building block of ATP, and the presence of ribose in the cell stimulates the metabolic pathway our bodies use to actually make this vital compound. If the cell does not have enough ribose, it cannot make ATP. So, when cells and tissues become energy starved, the availability of ribose is critical to energy recovery — and is often the rate-limiting nutrient for ATP production.

Normal, healthy muscle and heart tissue has the capacity to make all the ribose it needs. When normal tissue is stressed by overexertion, several days of rest will usually allow it to fully recover. The muscle may be sore during recovery, but eventually energy levels will be restored and the soreness will disappear. But when the muscle is chronically stressed, as results from many health conditions that affect tissue energy metabolism (and quite possibly the energy crisis seen in day-to-day modern life), the cells and tissues may not be able to make enough ribose quickly enough to recover. The consequence is chronic, persistent stiffness, soreness, and overwhelming fatigue that may never go away unless energy production is restored.

Ribose is made in the body by a slow, laborious process called the "pentose phosphate shunt." It is not found in food. From the published research, we knew that CFS/FMS caused the body to dump other key energy molecules, like carnitine. We then found that the body did the same with ribose, making it hard to get the mitochondrial "furnaces" working again, even after the other problems were treated. We wondered if giving ribose to people with CFS/FMS would jump-start their energy furnaces.

Research in ribose and CFS/FMS actually began with a case study that was published in the journal Pharmacotherapy in 2004.6  This case study told the story of a veterinary surgeon diagnosed with fibromyalgia. For months, this dedicated doctor found herself becoming more and more fatigued, with pain becoming so profound she was finally unable to stand during surgery. As a result, she was forced to all but give up the practice she loved.

Upon hearing that a clinical study on ribose on congestive heart failure was underway at the university where she worked, she asked if she could try the ribose to see if it might help her overcome the mind-numbing fatigue she experienced from her disease. After 3 weeks of taking ribose she was back in the operating room, practicing normally with no muscle pain or stiffness, and without the fatigue that had kept her bedridden for many months.

Being a doctor, she was skeptical, not believing that a simple sugar could have such a dramatic effect on her condition. Within 2 weeks of stopping the ribose therapy, however, she was out of the operating room and back in bed. So, to again test the theory, she began taking ribose again. The result was similar to her first experience and she was back doing surgery in days. After yet a third round of stopping ribose (with the return of symptoms) and starting it (with the reduction of symptoms), she became convinced and has been supplementing with ribose ever since.

Our initial pilot study in which we gave ribose to people with CFS or FMS was published in 2006. That study also showed marked improvement in participants.4  The D-ribose was well tolerated, with the main side effect being that a small percent of subjects found themselves to be actually over-energized or hyper. This generally responded well to simply lowering the dose or giving the ribose with food. In my clinical experience, this often suggests that the patient also needs adrenal support. This is because ribose has a negative glycemic index, causing a drop in blood sugar rather than a rise. In these cases, I add adrenal support to the ribose, usually resulting in additional benefit. 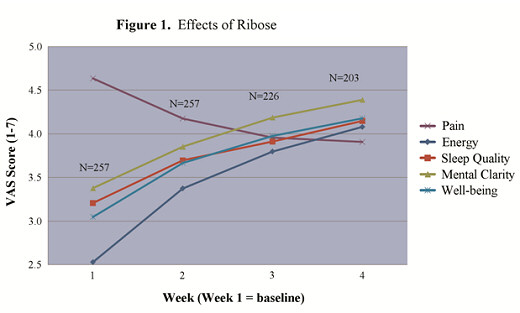 Nutrients That Can Promote Energy

The following are four notable nutrients beneficial to helping promote and maintain healthy energy production in the body.

7These statements have not been evaluated by the Food and Drug Administration. This product is not intended to diagnose, treat, cure, or prevent any disease.